In 1952, FUJITRANS started out handling lumber as a part of the port-related business sector in Nagoya Port, Japan.Since then, because of innovative RO/RO ships, which specialize in finished vehicle-transport, we have built the position where we are today.Now, we have a transportation network in the world.We will continue to meet your needs and provide safe and high-quality logistics services, along with our positive "Anytime, Anything, Anywhere" attitude.

In 1950s, Japan's post-war reconstruction period, there was a serious housing shortage of estimated 4.2 million units because a large number of houses had been burnt down during the war. To supply a massive demand for housing, a huge amount of lumber was imported through Nagoya port as construction material. The port was busy with many ships loaded with lumber and many of the ships had to unload cargos offshore without being berthed. The port was thriving.

In 1952, FUJITRANS CORPORATION (formerly known as FUJIKI KAIUN KAISHA, LTD.) was founded at Nagoya port and started lumber handling business. Under the leadership of the founder, FUJITRANS workers unloaded lumber so smoothly and quickly using sophisticated skills, so that the company was called "Quick stevedore FUJIKI". 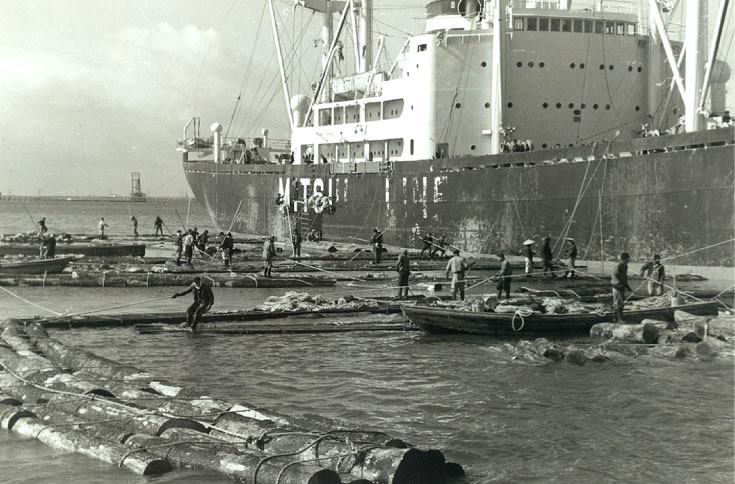 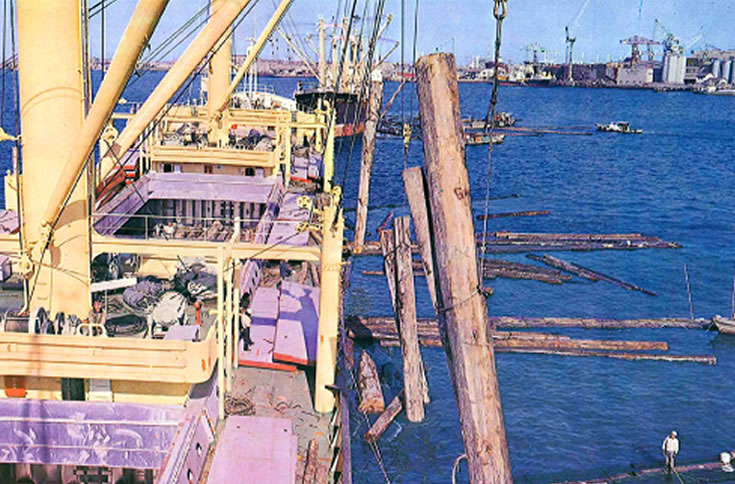 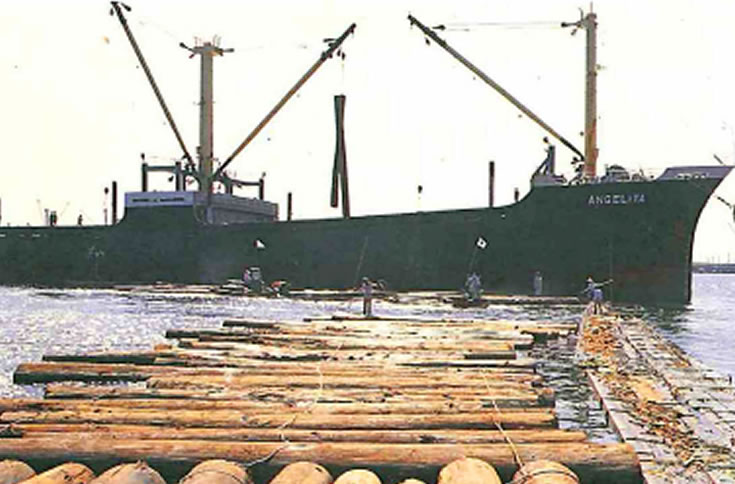 1959
Contribution for recovery
from disaster

On September 26, 1959, the violent Typhoon Vera struck Japan and caused enormous damage. Especially, Nagoya's coastal part along Ise Bay was widely flooded due to strong wind and storm surge. In addition, a large amount of lumber aggravated the damage.

Responding to this, FUJITRANS took actions for recovery before receiving a request from local government. Althought it was estimated to take one month to collect all the beached lumber, FUJITRANS workers worked hard as one and collected them in just one week. This incident prompted us to be deeply aware of connection between the local community and the company, and to realize the importance of being a part of the society.

As Japanese economy grew fast, production and diffusion of automobiles made in Japan also increased rapidly. However, vehicle transport was facing a major obstacle. Back then, cars were transported via land, requiring a driver for each vehicle . It was quite inefficient.

This prompted FUJITRANS to eye marine transport using ship that can carry a large amont of cargo at one time. On the ships that came from Hokkaido and Kyushu to Nagoya port to carry coal, FUJITRANS loaded automobiles as their return cargo. In the beginning, cars were loaded onto the empty hold of the ship by crane, where coal had been loaded. But loading took long time even with crane. Isn't there any safer, more efficient way of transportaion? - This is why TOCHOMARU, the first RO-RO ship in Japan designed and developed especially for automobile. It had a ramp way, which enabled loading and unloading by driving, and four layers of deck boards. It made the foundation for today's efficient and high quality car transportation technology. 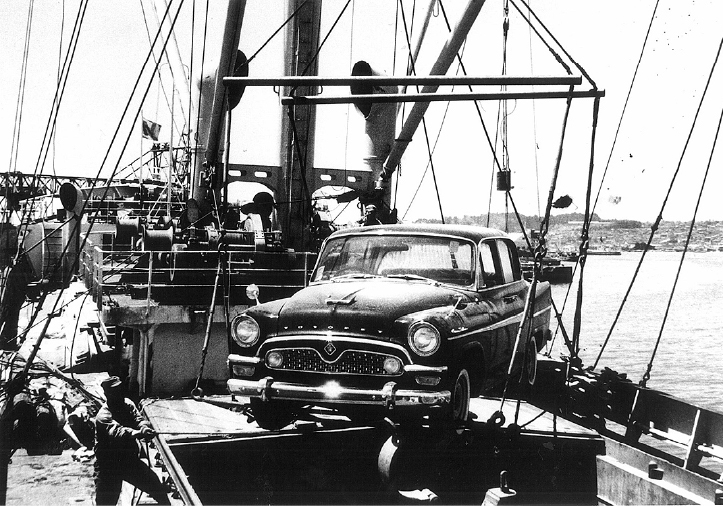 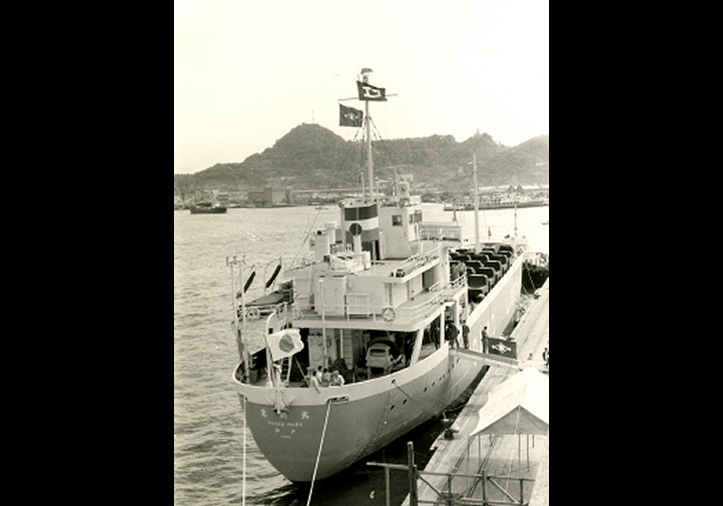 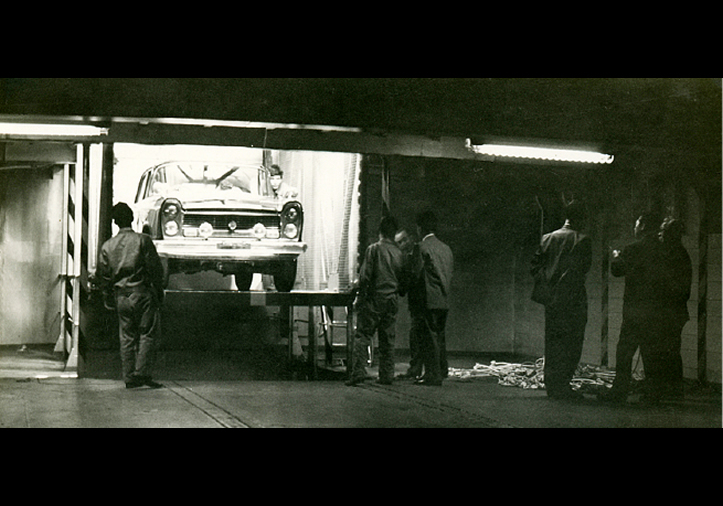 In early 1990s, Japan experienced burst of bubble economy. In the midst of rapidly changing social structure, FUJITRANS made a dicision: toward the 21st century, FUJITRANS will step out of Japan and expand into the world as an international logistics company. With this goal in our mind, we renewed our former name that had over 40 years of history to "FUJITRANS CORPORATION".

We currently operates in North America, Europe, East and Southeast Asia, with over 5,000 employees, to provide extensive logistics services. 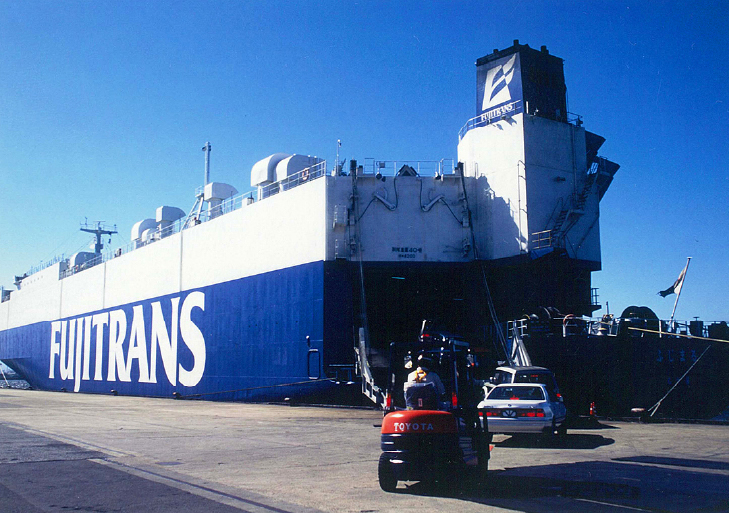 We have been accredited as an Authorized Economic Operator (AEO) for cargo security management and compliance systems.

The warehouse built by FUJITRANS LOGISTICS (THAILAND) CO., LTD. in 2014 was the first self-owned warehouses in Southeast Asia, which triggered business activation centered on Asia. This was followed by the successive establishment of warehouses and vehicle storage yards in Indonesia and Myanmar, Vietnam.

Since 1962, we have been operating a combination of coastal RO/RO vessels and trailers for the intermodal transportation of general cargo and automobiles, and this has been one of the pillars of our business.

Utilizing the know-how accumulated in Japan for more than half a century, FUJITRANS LOGISTICS PHILIPPINES has started the coastal shipping business in the Philippines.

Please select the local office you wish to contact.